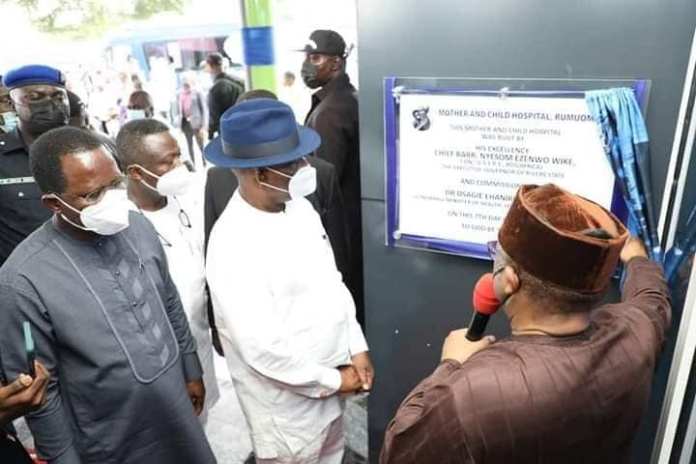 Governor Nyesom Wike has commissioned the 132-bed capacity Mother and Child Hospital built to boost Maternal and Child health in the South-South.

The ceremony which held at Rumomasi on Monday had dignitaries and practitioners in the Health sector in attendance.

In his address, Governor Wike stressed the level of negligence medical doctors have shown in managing most health facilities in the country, adding that such medical officers when appointed heads in these facilities, collect money for services that they render but are still incapable of maintaining the equipment.

He enjoined them to be show responsibility for maintaining the public healthcare facility under their care and not allow investments to decay.

Commissioning the project, the minister of health, Dr Osagie Ehanire, applauded Governor Wike for his vision and level of achievement in the health sector, which shows determination and interest to add value to the health sector.

Speaking at the flag-off of construction commencement awarded to Julius Berger, Governor Wike maintained that his administration is committed to delivering projects as promised to the Rivers people who stood in support of his becoming Governor.

He revealed that why the centre is being named after Dr Peter Odili is because it is proper to honour a man who has contributed immensely to the growth of the State.

“I have performed. So, when you hear Dr Odili is a bad man, it is because he said Ikwerre man will be governor.

“Now we are governor, must we not thank him? It’s not everybody that can stand firm, so we should thank him. Ordinarily, no Ikwerre man, if we are sincere and grateful, should raise a hand against Odili and his family.”

Dr Osagie Ehanire, in his speech, said that cancer and Cardiovascular treatment centre will supplement the assets available to treat Non-Communicable Diseases (NCDs), which would help in reducing its prevalence, not only in Rivers state but in the country at large.

“I observe that this project has been named after a personality who has built a reputation, not just as a Medical Practitioner, but a foremost public figure in Rivers State as a Former State Governor.

“I salute you, Your Excellency, Sir Dr Peter Odili, for your contribution to this State and congratulate you on the recognition the people are giving you.”

He applauded the Wike administration which he said has invested so much in the training of health personnel and is currently funding about 490 medical students on state scholarship at the PAMO University of Medical Sciences.

Describing the facility, Rivers State Commissioner for Health, Prof. Princewill Chike said the Cancer and Cardiovascular Disease Treatment is a three-storey building facility, which will be equipped with modern medical equipment that can respond to every cancer and cardiovascular concerns within the country and from oversees.

He further revealed that the facility will have a helicopter pad for emergency cases.